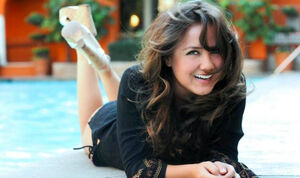 Jennifer Veal is an English actress. She portrayed Agatha on the Disney Channel sitcom Jessie. She portrays Vira Emp in A High School Rockstar.

Jennifer Veal began dancing at age 5 and played the role of "Baby June" in Gypsy at the Warwick Arts Centre, Coventry aged 10. At 11 she made her West End debut in Chitty Chitty Bang Bang at The London Palladium, working with stars such as Michael Ball and Wayne Sleep and at 12 was offered a place at the Sylvia Young Theatre School, London. Although this meant living away from home on weekdays, she pursued her dream and has never looked back. She has worked with Elton John & Tim Healy (opening cast of Billy Elliot) and Il Divo (Royal Variety Performance 2005) to name but a few. At present she stars in Disney Channel UK's As The Bell Rings as "Lucy". Veal has a recurring role on Disney Channel Original Series Jessie.