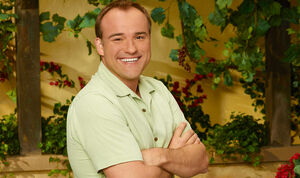 Jerry Russo is Theresa's husband, and father to Alex, Max, Andre, and Justin. He is the previous wizard while Theresa is the mortal.

erry Russo is the average father. He is stern, protective, and is constantly annoyed by his children. Although he does not have powers, his children inherited their powers from him. Jerry instructs his children in the proper practices to be used when conducting magic. He owns the Waverly Sub Station and runs the restaurant with his wife.