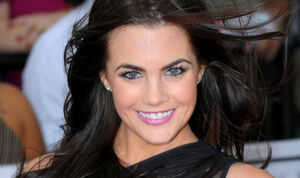 Jillian Murray is an American Actress. She is perhaps best known for her role as Portlyn on Sonny With a Chance and as Heather in An American Carol. She portrays the character of Maddie Porter

She attended Wyomissing Area Junior/Senior High School and left her freshman year in 1998 and lived within One Mile from Singer Taylor Swift, however they were not in the same grade. Jillian Murray graduated from Catalina Foothills High School in 2002. In the Summer of 2002, Murray immediately moved to Los Angeles at age 18. However it is unsure if she never attended College.

Murray made her film debut in the independent film Deep Toad as Natashia. She was later cast in Fifty Pills as Jayne, followed by Legacy also known as Pretty Little Devils. Her first leading role was The Fun Park. In 2009, Murray portrayed Gwen Adams in the romantic comedy American High School. She later played Heather in An American Carol, Abby Graves in The Graves, and Lex Mitchell in Forget Me Not.

Murray starred in a recurring role on the Disney Channel original series Sonny With a Chance, playing Portlyn. She had a role in Cougar Hunting playing the lead Penelope (Lara Flynn Boyle's daughter), as well as in Wild Things: Foursome playing Brandi Cox. Murray's face and body were used as the model for the character of Liara T'soni in the Mass Effect franchise of video games. She recently appeared alongside her ex-boyfriend in the premier episode of the 2011 revival of the reality series Fear Factor. In 2012, Murray starred alongside Danny Trejo and Ron Perlman in the action film Bad Ass, based upon the YouTube sensation AC Transit Bus fight.