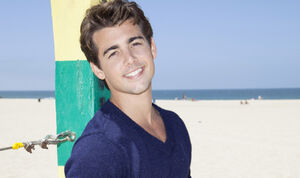 John DeLuca is an American actor who is known for his role as Butchy in the Disney Channel Original Movie, Teen Beach Movie. He also guest starred with Maia Mitchell on an episode of Disney Channel's latest show, Jessie, along with a guest appearance on Wizards of Waverly Place. John was more recently in Twisted, playing Cole Farell the main character's friend on the soccer team. He plays the role of Steven Iceberg.

DeLuca's television credits include roles in "Wizards of Waverly Place," "Jessie," "Ugly Betty" and "Lights Out." John's first school play was "The Wizard of Oz," in which he played the scarecrow. He also played the role of Kenickie in a high school performance of "Grease."

Raised in Longmeadow, Massachusetts, DeLuca graduated with a Bachelor of Arts degree in theatre from Fordham University in New York City. He is an eagle scout and is trained on stilts and can juggle. DeLuca has two younger brothers and his interests include playing guitar, watching movies, playing sports and spending time outside, especially on the beach.