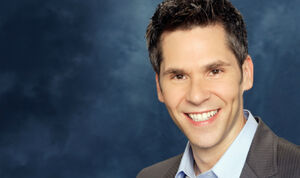 John Morris Henson (born July 11, 1967) is an American comedian, talk show host, and actor. He is the co-host of ABC's Wipeout, a prime-time series game show now in its fifth season. He plays the role of Mike Moon

Henson was born in Stamford, Connecticut, to Joe and Barbara (née Wright) Henson. He has four older brothers, one of whom is Dan Henson, the President and CEO of GE Capital, Americas. Another is Frank (Bubba) Henson, teacher at St. Luke's School, New Canaan, CT. He studied acting at Boston University, Circle in the Square, Playwrights Horizons and Three of Us Studios in New York City. He has starred in various theatre productions such as Rosencrantz and Guildenstern Are Dead, Conduct Unbecoming, Heinous Crimes and Other Delights, The Greenhouse Effect and Remote Evolution.

Henson was born with a white streak of hair on the right side of his head. As a result he received the nickname Skunk Boy while hosting Talk Soup.

Henson began his career as a stand-up comic. He started appearing in films in the mid to late 1990s. Henson was the longest-running host (four years) of Talk Soup on the E! Entertainment Network. Henson hosted approximately 1,140 shows in the four and a half years he was host. In 2004, he was the host of The John Henson Project, a short-lived comedy-reality show on Spike TV. Henson has also hosted several broadcast specials including ABC's Best Commercials You've Never Seen, ABC's Best TV you've never seen and most recently the 33rd Annual Daytime Creative Arts Emmy Awards. From 2005 - 2007 Henson was the co-host of Watch This! a daily television show on the TV Guide Channel. Henson has also produced numerous field segments on the entertainment industry for MSNBC and CNN. Beginning in 2008, Henson has had a small recurring role as a local newscaster on My Name Is Earl.

Since 2008, Henson has co-hosted an obstacle course game-show on ABC, Wipeout. Henson always ends the show with the catch phrase "Good night, and Big Balls," a reference to the signature obstacle in the show. He has also appeared in the Blink-182 music video for their song What's My Age Again?

Retrieved from "https://ahighschoolrockstar.fandom.com/wiki/John_Henson?oldid=6477"
Community content is available under CC-BY-SA unless otherwise noted.