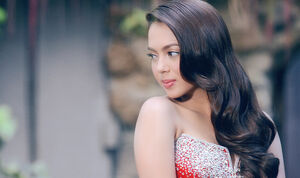 Julia Montes is a Filipina actress and commercial model of German-Filipino descent. She was a cast member of Goin' Bulilit before appearing as Clara in Mara Clara. She was popularly known as Katerina in Walang Hanggan, which catapulted her into fame. She also played the main protagonist Sarah in the primetime series Muling Buksan Ang Puso.

Julia Montes was born in Pandacan, Manila to Gemma e, Mara Schnittka. She was discovered after appearing in TV commercials, which landed her spots in a number of GMA-7 shows such as Sana Ikaw Na Nga as the daughter of actors Robin da Rosa and Angelu de Lee of her own yaya. She also appeared in I Love Betty La Fea, Ligaw na Bulaklak, and a few other MMK episodes.

In 2010, she started going by Mara Montes and made guest appearances in shows such as Gimik 2010 and Katorse. That same year, her biggest break-out role came when she starred as Clara Del Valle/David in the remake of one of the famous Philippine telenovela, Mara Clara. The title roles were previously portrayed by Judy Ann Santos and Gladys Reyes. During the show's production, she changed her name from Mara Montes to Julia Montes as not to confuse the audience during promotion. Julia was cast in Gladys' past role as Clara, an overindulged rich but cruel and inflexible girl who is switched with a down-to-earth poor girl (Mara) in the hospital at birth. Playing opposite her as Mara was her Goin' Bulilit co-star and friend, Kathryn Bernardo.

In 2011, she starred in Growing Up as Tammy, reuniting her with her Mara Clara co-star, Kathryn Bernardo. EJ Jallorina, Kiray Celis, Diego Loyzaga, and Daniel Padilla also starred. Growing Up ended in February 2012. Her first major movie role came in 2011 as she starred alongside Kathryn, Enrique Gil, Sam Concepcion, and Agot Isidro in Way Back Home.

In 2012, Montes starred in the teleserye Walang Hanggan as Katerina, marking her first team-up with Coco Martin. The teleserye became one of the most viewed teleseryes of all time and skyrocketed her already successful career, giving her the opportunity to star in more projects. This teleserye ended on October 26, 2012. That same year, she was cast in the teen romantic comedy film, The Reunion as Ligaya, with an ensemble cast composed of Enchong Dee, Enrique Gil, Xian Lim, Kean Cipriano, Jessy Mendiola, Megan Young, and Bangs Garcia. She was also a part of the horror film, The Strangers with Enrique Gil, JM de Guzman, Enchong Dee, Cherry Pie Picache, and Janice de Belen.

As a follow-up project after the success of their team-up in Walang Hanggan, she and Coco Martin starred in the 2013 Star Cinema film, A Moment In Time. She will top-bill 2013's newest teleserye titled Muling Buksan Ang Puso starting July 8, 2013 on Primetime Bida. She will portray Sarah, a role Montes has stated was "tailor-fit" for her. Starring with her in the serye is Enrique Gil and Enchong Dee, both of whom she has worked with in the past in various projects. She is also working on a romantic comedy distributed by Star Cinema, once again with Enrique Gil, and actors Martin del Rosario and Pokwang. The film is currently in production and is tentatively titled Call Girl.

Retrieved from "https://ahighschoolrockstar.fandom.com/wiki/Julia_Montes?oldid=11111"
Community content is available under CC-BY-SA unless otherwise noted.