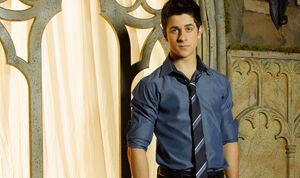 Justin Russo is the eldest of the Russo kids and is a full wizard like his younger sister Alex. He's one of the most gifted wizarding students of recent times, creating his own spell, being able to use the Russo family wand with amazing success.

Justin is one of the most intelligent and posses vast knowledge, both of magical things, such as spellcraft and magical creatures, but also mathematics, history, robotic and geography. He's capable of built robots, water motors and mechanisms that simulate a flying carpet. His own knowledge makes him the chosen by his family to solve problems, like found excuses to hide magical affairs to protect magic from exposure.

Justin is labeled by his own family to be kind and generous but also has a vengeful and naive side. He strongly believes in aliens and that the language spoken by the Alien Language Club is actual alien and not make 'em up. He's also sometimes self-centered and likes to be the center of attention, being sometimes deceived when he's praised.