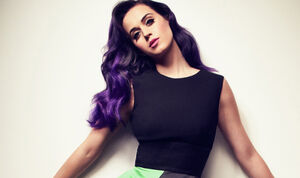 Katy Perry is an American singer, songwriter, businesswoman, philanthropist, and actress. She was born and raised in Santa Barbara, California. Having had very little exposure to mainstream pop music in her childhood, she pursued a career in gospel music as a teen and released her debut self-titled studio album. She also recorded a second solo album which never received release.

Katheryn Elizabeth Hudson was born in Santa Barbara, California to devout Pentecostal pastors Keith Hudson and Mary Perry. She is the second of their three children and has Irish, Portuguese, English, and German ancestry. She has a younger brother named David. and an older sister named Angela. Mary's half-brother was director Frank Perry.

As a child, Perry attended Christian schools and camps. She was incorporated into her parents' ministry, singing in the church between the ages of nine and seventeen. She grew up listening to gospel music, and in an interview she said, "Growing up I wasn’t really allowed to listen to a whole lot of what my mom would call, secular music," She learned how to dance in a recreation building in Santa Barbara. She was taught by seasoned dancers and began with swing, Lindy Hop, and jitterbug. She took her GED during her freshman year at Dos Pueblos High School and decided to leave school in the pursuit of a career in music. Perry initially started singing " because [she] was at that point in [her] childhood where [she] was copycatting [her] sister and everything she [would do]."She took cassette tapes her sister Angela practiced with and rehearsed the songs and performed them in front of their parents. They suggested she take vocal coaching. She grabbed the opportunity and began taking lessons at the age of nine and continued until she was sixteen.

In 2007, Perry signed a recording contract with Capitol Records and adopted her current stage name. The following year, she came to prominence with her second studio album and first mainstream release, One of the Boys, which produced singles "I Kissed a Girl", "Hot n Cold", "Thinking of You" and, "Waking Up in Vegas". The project was further promoted through the Hello Katy Tour. Perry's third record, Teenage Dream (2010), spawned the Billboard Hot 100 chart-topping singles "California Gurls", "Teenage Dream", "Firework", "E.T." and "Last Friday Night (T.G.I.F.)". In doing so, it became the first album recorded by a female artist in history to produce five number-one hits, and the second album overall behind Michael Jackson's Bad (1987). Perry embarked on the California Dreams Tour following its release. In 2012, it was reissued as Teenage Dream: The Complete Confection and contained the number-one single "Part of Me". Her fourth album Prism is expected to be released October 22, 2013.

Perry has received numerous awards and nominations. She has also been nominated for nine Grammy Awards and was named by Billboard as 2012's Woman of the Year. She remains the only artist to spend 69 consecutive weeks in the top ten of the Hot 100. She has ventured into celebrity endorsement and released fragrances Purr, Meow and Killer Queen. She made her film debut voicing Smurfette in The Smurfs (2011). Perry was ranked at number fourteen on Billboard's list of top moneymakers of 2011, grossing more than $11 million.[4] She was spotlighted in her own 3D autobiographical film Katy Perry: Part of Me (2012), which concentrated on her life as a touring artist and the breakdown of her one-year marriage to English comedian Russell Brand.

Retrieved from "https://ahighschoolrockstar.fandom.com/wiki/Katy_Perry?oldid=9061"
Community content is available under CC-BY-SA unless otherwise noted.