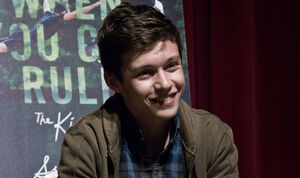 Keith Jacobs is Aaron's 16 year-old brother. He is first introduced in Season 3 in the episode, Bankrupts & Brothers. He is portrayed by Nick Robinson.

Keith is Aaron's younger brother. He pretended to be Aaron's private investigator to get close to him. He is very resourceful. He gathered information about his brother through his friends by being friends with them. Keith admires his brother, even if he didn't grow up with him. He seems to have troubles with his school work, as he asked for help for his english subject. He had high expectations for his brother, like being smart, but still accepted him for who he is. He also explained to Aaron about their biological parents.

Keith is very keen in finding out truth, especially about his brother. He spent two years of his life being devoted to looking for Aaron, so that he could be with him and tell him all about their parents. Keith is also quite rebellious, as he mentioned that he ran away from home. Keith is introduced to Team Austin, and gets accepted easily.

Retrieved from "https://ahighschoolrockstar.fandom.com/wiki/Keith_Jacobs?oldid=9589"
Community content is available under CC-BY-SA unless otherwise noted.