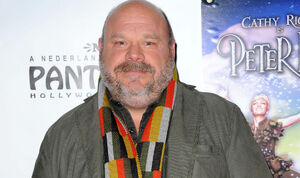 Kevin Chamberlin is an American actor. He currently stars as Bertram on the Disney Channel Original Series Jessie. Chamberlin was born in Baltimore, Maryland, and raised in Moorestown Township, New Jersey, and he moved there at nine-years old. He graduated from Rutgers University's Mason Gross School of the Arts with a Bachelor of Fine Arts in Acting.

Chamberlin has been nominated for Drama Desk and Tony Awards for Dirty Blonde (as Charlie), Seussical (as Horton), and The Addams Family (as Uncle Fester). Additional Broadway theatre credits include My Favorite Year, Triumph of Love, Abe Lincoln in Illinois, Chicago, and The Ritz. He also appeared in the 1999 gay-themed movie .Trick. He also appeared in Die Hard with a Vengeance as an enthusiastic NYPD bomb defusal expert. In Lucky Number Slevin, he again had a supporting role as a New York police officer. Chamberlin's most recent work includes the role of Aron Malsky in the NBC primetime series Heroes. He also made an appearance in a Law and Order: Special Victims Unit episode titled Redemption where he played a man named Roger Berry, who raped and murdered a number of women a few years back and was being hunted by Elliot and his partner Jonathan Hawk. He was also a guest in season ten episode thirteen on the sitcom Frasier. Chamberlin previously appeared as Uncle Fester in the musical The Addams Family, a role for which he won a Broadway.com Audience Award for Favorite Performance By a Featured Actor In a Broadway Musical. Brad Oscar replaced him in the role of Uncle Fester on March 8, 2011. Chamberlin currently stars in the Disney Channel Original Series Jessie as a butler named Bertram. He is also filming a Disney Channel Original Movie called Teen Beach Movie that stars Ross Lynch, Maia Mitchell and Steve Valentine which will air in 2013.

Retrieved from "https://ahighschoolrockstar.fandom.com/wiki/Kevin_Chamberlin?oldid=8665"
Community content is available under CC-BY-SA unless otherwise noted.