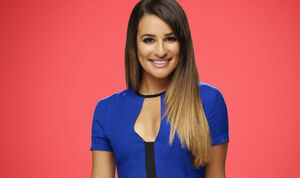 Lea Michele is an American actress and singer, best known for her performance as Rachel Berry on the Fox television series Glee. Michele's portrayal of Rachel has received much critical praise, earning her two Golden Globe nominations and an Emmy nomination for her performance. She has also received a Satellite Award, a Screen Actors Guild Award and three consecutive People's Choice Awards.

Michele began working professionally as a child actress on Broadway in productions such as Les Misérables, Ragtime, and Fiddler on the Roof. In 2006, she originated the lead role of Wendla in the Broadway musical Spring Awakening for which she received a Drama Desk Award nomination. On film, Michele starred in the 2011 romantic comedy movie New Year's Eve, and has voiced the character of Dorothy Gale in the upcoming animated movie Legends of Oz: Dorothy's Return.

Michele signed to Columbia Records as a solo recording artist in 2012. Her first single, "Cannonball", was released on December 10, 2013. Her debut album, Louder, was released on March 4, 2014. The album debuted number 4 on the US Billboard 200. Her first book, Brunette Ambition, is set for release on May 13, 2014, and will be published by Harmony Books.

Michele was born in The Bronx, New York City. She is the only child of Edith, a nurse, and Marc Sarfati, a delicatessen owner. Her mother is Italian American and Roman Catholic, while her father is a Sephardic Jew. Michele was raised Catholic, and has stated that her father "gladly" attends church with her and her mother. She grew up in Tenafly, New Jersey. She attended Rockland Country Day School for elementary school in New York and then Tenafly High School. Michele was home schooled one year while working in Toronto, Ontario on Ragtime. She attended Stagedoor Manor in the Catskills, a center for performing arts training. She was then later accepted to the Tisch School of the Arts at New York University, but opted instead to continue working professionally on the stage.

Michele adopted her stage name at an early age; when she went on her first audition, she gave her name as "Lea Michele," and has used it ever since. She has stated that she changed it because she was teased about the pronunciation of her last name.

Michele has the vocal range of a soprano. She made her Broadway debut in 1995, at the age of 8, as a replacement in the role of Young Cosette in Les Misérables. This was followed by the role of Tateh's daughter, the Little Girl, in the 1998 original Broadway cast of Ragtime. In 2004 (during her senior year of high school), Michele played Shprintze in the Broadway revival of the musical Fiddler on the Roof. She also sang on the 2004 Broadway revival cast recording of Fiddler on the Roof.

She played the role of Wendla Bergmann in Steven Sater and Duncan Sheik's musical version of Spring Awakening, starring in early workshops and Off-Broadway and finally originating the role in the Broadway production in 2006 at the age of 20. Around the same time that the show was set to go to Broadway, she was offered the role of Éponine in the Broadway revival of Les Misérables. She elected to remain with Spring Awakening, which debuted on Broadway in December 2006. She was nominated for a Drama Desk Award for her performance in Spring Awakening in the category of Outstanding Actress in a Musical.

On May 18, 2008, Michele left Spring Awakening with her co-star Jonathan Groff, where they were both replaced the next day by Michele's understudy Alexandra Socha and newcomer Kyle Riabko. She performed in a reading of Sheik and Sater's new musical, Nero, in July 2008 at Vassar College. She portrayed Éponine in the Hollywood Bowl's Les Misérables concert in August 2008.

Michele stars in the Fox musical comedy-drama series Glee as Rachel Berry, the show's female lead and star singer. In casting Glee, series creator Ryan Murphy sought out actors who could identify with the rush of starring in theatrical roles. Instead of using traditional network casting calls, he spent three months on Broadway, where he found Michele. The role of Rachel was written specifically for Michele. The pilot episode was filmed in late 2008. In an interview with The Washington Post, Michele commented on her casting, saying: "I was kind of just thrown into this—this is one of the first television jobs I've ever had. Of course being able to sing helps bring a sense of comfort. The character I'm playing is really outgoing—she performs in her everyday life as though she's performing in front of a huge audience." She took the role because of Rachel's characterization, and explained: "Not only is she a singer, but she has so much heart—I think it's what we need on TV. A show that is filled with heart and love that is funny. It sends an amazing message to kids about the arts and being who you are." Chicago Tribune's Maureen Ryan wrote that Michele "not only has an amazing voice but manages to make her character, spoiled diva Rachel Berry, more than a humorless stereotype." Denise Martin of The Los Angeles Times commented in her review of the episode "The Rhodes Not Taken": "If there's any justice in the world, Lea Michele will win a Golden Globe and an Emmy for playing Rachel."

Michele has won a number of awards for her portrayal of Rachel. At the 2009 Satellite Awards, she won the award for Best Performance by an Actress in a Musical or Comedy Television Series. In 2010, Michele won the NewNowNext Awards for Brink of Fame: Actor. In 2009, she was nominated for a Teen Choice Award in the category Choice TV Breakout Star. That same year, Michele was nominated for a Golden Globe in the category Best Actress - Television Series Musical or Comedy, and an Emmy Award for Outstanding Lead Actress in a Comedy Series. She received another Teen Choice Award nomination in 2010 for Choice TV Actress: Comedy. Michele was included in Time Magazine's 2010 list of the 100 Most Influential People In the World. She won the 2012 People's Choice Award for Favorite TV Comedy Actress. Several songs performed by Michele as Rachel have been released as singles, available for digital download. In December 2010, Michele received Billboard's First-Ever Triple Threat Award. Her cover of The All-American Rejects' "Gives You Hell" reached the top 40 on the US Billboard Hot 100. Michele is featured as lead singer in 14 of the top 20 selling Glee Cast songs as of 2010. Michele was nominated for two Grammy Awards in 2011. The first for Best Pop Performance by a Duo or Group with Vocals ("Don't Stop Believin'"), the second for Best Compilation Soundtrack Album for a Motion Picture, Television, or Other Visual Media (Glee: The Music, Volume 1). Michele said of the first Grammy nomination: "I like that it's for "Don't Stop Believin'", which is for the whole cast, so that we all get to go. That's just awesome." She was nominated again for Best Actress - Television Series Musical or Comedy at the 2011 Golden Globe Awards.