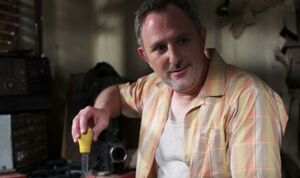 Lester Dawson is Ally's father and the owner of the music store, Sonic Boom. He is a recurring character on the show. Not much is known about his wife because she hasn't made an appearance and they have never talked about her. He is known to play the accordion.

Lester Dawson is Ally's father, and born in Miami. He owns a music store called Sonic Boom. He is very carefree and is not very strict to Ally except when it comes to Ally's love life. He is separated from his wife, although they both take care of Ally and sometimes even act as though they were still married.

Retrieved from "https://ahighschoolrockstar.fandom.com/wiki/Lester_Dawson?oldid=9174"
Community content is available under CC-BY-SA unless otherwise noted.