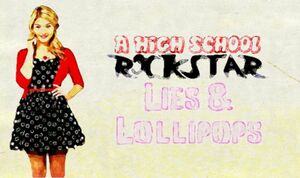 Lies & Lollipops is the sixth episode in Season 2 of A High School Rockstar. It is scheduled to air on October 27, 2012.

After Austin forgets to do his history report, he invents a series of lies to buy him some time to finish it. He forces Ally, and his friends to help him after the lie gets bigger to the point that the whole school is convinced that there are spirits roaming around the school. During the panic, Trish becomes obsessed with the lollipops being sold in the school vending machine.

Retrieved from "https://ahighschoolrockstar.fandom.com/wiki/Lies_%26_Lollipops?oldid=6964"
Community content is available under CC-BY-SA unless otherwise noted.