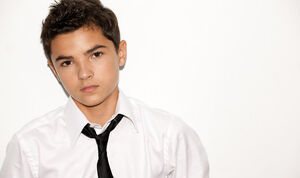 Logan Grove is an american child actor. He plays the role of Connor Frank.

Logan Grove was born on July 24, 1998, in Palmer, Alaska. He grew up skiing, playing soccer, and taking gymnastics. After entering a national talent showcase at the age of 6 and winning multiple awards, Logan was hooked on acting. In 2005 his family moved to Los Angeles, and within a couple of months he booked his first role on TLC’s Untold Stories of the ER.

A chance meeting led to Logan signing with top talent manager Lori Knight. Under her guidance, he has gone on to book 3 pilots and lead roles in film and television, and has worked with actors such as Robert DeNiro, Billy Bob Thorton, Susan Sarandon, and Peter Facinelli. Logan’s short film, Paperboy, in which he played the title role, won it’s category at the International Youth Film Festival in Wales in 2010.

Logan has booked several national commercials and print campaigns for companies such as Sears, Kohl’s, Tropicana, Lexus, Trix, Target, Wrangler, and McDonalds. His current projects are voicing the title character Gumball on Cartoon Network’s award-winning show, “The Amazing World of Gumball” and the character Garfield Logan on Cartoon Network’s “Young Justice”. In 2012 he was nominated for a prestigious Annie Award for Voice Acting in a Television Production for his work on The Amazing World of Gumball. The show won the Annie for Best Television Production for Children.

Logan is finished and is looking forward to high school. He loves surfing, running cross country, and running distance races in track and field.

Retrieved from "https://ahighschoolrockstar.fandom.com/wiki/Logan_Grove?oldid=9226"
Community content is available under CC-BY-SA unless otherwise noted.