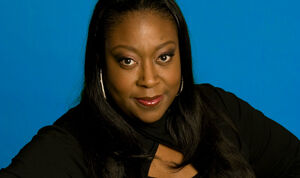 Loni Love is an American comedian. After quitting her job as an electrical engineer in 2003, Love began to pursue a career in stand up comedy. She was the runner-up in Star Search 2003 and was named "Top 10 Comics to Watch" in both Variety and Comedy Central in 2009.

Love was born in Detroit, Michigan, and grew up in the Brewster-Douglass Housing Projects. Prior to her career as a comedian she was an electrical engineer, an experience she talks about in many of her acts. After graduating from high school in 1989, she had worked for a time on the General Motors assembly line putting doors on 1993 Oldsmobile Cutlasses, work which ignited her interest in electrical engineering. Love then received a scholarship and her bachelor's degree in electrical engineering from Prairie View A&M University in Texas. While at Prairie View, she minored in music and was also a member of the Eta Beta Chapter of Delta Sigma Theta. It was there that she discovered stand-up comedy after winning a $50 competition and then performed constantly during her college life. After finding work as an engineer at Xerox in California, she continued to do stand-up after work in clubs and became a regular at the Laugh Factory. After eight years of working at Xerox, Love resigned to pursue comedy during a layoff to prevent someone else from losing their job.

Love started her comedic career in 2003, after appearing on Star Search, reaching the finals and losing in a close competition to the winner. Since then, she has appeared in films and numerous television shows. She has also acted in dramatic theatre plays. Love was named "Hot Comic" for 2009 in Campus Activity magazine and one of the "Top 10 Comics to Watch" in both Variety and Comedy Central. She was awarded the Jury Prize for best stand-up at the 2003 US Comedy Arts Festival. In 2009, Love became the CNN correspondent for D. L. Hughley Breaks the News and covered the inauguration of President Barack Obama. She also appears regularly in comedy clubs and the college comedy circuit. In late 2009, Love recorded her first one-hour Comedy Central special, America's Sister, which aired on May 8, 2010.