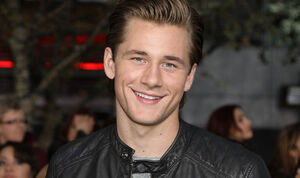 Luke Benward is an American teen actor and singer, best known for his starring role as Billy Forrester in How to Eat Fried Worms and as Charlie Tuttle in the 2008 Disney Channel Original Movie, Minutemen. He also played the role of "Nicky" in Mostly Ghostly: Who Let the Ghosts Out? and played Stevie Dewberry in the film Because of Winn-Dixie. At the age of 7, he appeared in Martina McBride's music video for "Concrete Angel". He also played in the Disney Channel Original Movie, Girl vs. Monster as Ryan Dean, the love interest of Skylar Lewis (Olivia Holt). Also featuring as Matthew Pearson in See Dad Run as the current love interest of Emily Hobbs (Ryan Newman). He portrays Laith Aries.

Benward was born in Franklin, Tennessee, the son of Kenda (née Wilkerson) and Aaron Benward. His father is in the country duo Blue County, his mother is a part-time actress, model, and acting coach, and his grandfather is Contemporary Christian artist Jeoffrey Benward. He has two younger sisters.

Benward's acting career started when he landed a role in the film We Were Soldiers as David Moore in 2002. His success grew in 2006, when he played Billy Forrester in the movie How to Eat Fried Worms, which he won a Young Artist Award for in the category of "Best Young Ensemble in a Feature Film". He also played Charlie Tuttle in the Disney Channel Original Movie Minutemen, the 14-year-old Alan in Dear John, and the little boy who helps the abused girl in the music video "Concrete Angel" by Martina McBride.

Benward's first album, Let Your Love Out, came out on January 5, 2009, and contained five songs. He also toured with the Christian group iShine LIVE for a short time, where he would sing his music in concert. The record label that signed him is called In Crowd Productions, whose collective credits include Hilary Duff, India.Arie, the Backstreet Boys, Mat Kearney, Death Cab for Cutie, and the Jonas Brothers. He has also been in various commercials, including Nintendo, McDonald's, Willy Wonka, American Express, and Hamburger Helper.