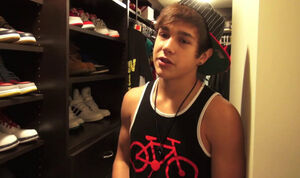 Luke Posey is Starr Records' artist. He is Austin's arch nemesis and he is a singer and dancer. He is portrayed by Austin Mahone

Luke is an arrogant, selfish and annoying teenage pop star, according to Trish. He is very proud of his accomplishments and his status, to proud that he boasts it to anyone, especially Austin Moon. He is signed to Starr Records and goes to Miami Senior High. He always competes for attention with Austin Moon and makes sure he always gets the spotlight. He is very talented and good looking, but his arrogance and his big ego does not please everyone.

He is called a Poser by Austin and he calls Austin by his middle name, Monica. He has a very strong confidence and self-esteem, which makes him boastful. He announces his talent and his good looks to everyone, as when he was touring stduents around Starr Records with Austin. Although self-centered, Luke shows his passion for music and dancing to give joy to people. Like Austin, Luke also seems to not like songs of Justin Bieber, as seen when both the guys disagreed in singing the song "As Long As You Love Me". He seems to give way to his fans as he sang the song when requested. He cares for his fans and treats them as friends.

Retrieved from "https://ahighschoolrockstar.fandom.com/wiki/Luke_Posey?oldid=9816"
Community content is available under CC-BY-SA unless otherwise noted.