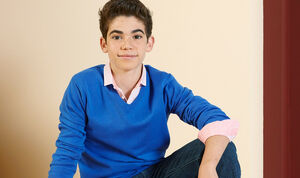 Luke Ross is the mischievous boy of the Ross Kids. He is the one to suggest they let Team Austin stay at their house so that he could teach Austin his dance moves and make it be known around the globe, even though his parents can do it.

Luke Ross is a mischevious, funny boy and prank-loving boy. Several times he is shown to be dull, especially in math, yet he is clever when it comes to playing tricks on his siblings and Bertram. Luke is a very talented at dancing, especially break dancing. He often finds toning his dancing skills down to be difficult.

He loves breakdancing and video games. He also thinks and considers himself as a "chick magnet" and a "ladies' man." He also has a major crush on Jessie. He has a signature dance move called "Luke Force" in reference to Star Wars as his dad is a director and had a light saber.