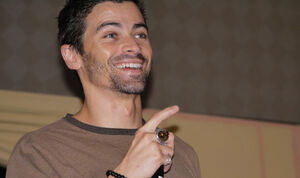 Matt Cohen is an American film and television actor best known for playing Aiden Dennison on the teen drama South of Nowhere. He portrays the character of James Carmichael.

Cohen was born in Miami, Florida. He has starred in several films such as Boogeyman 2, Dark House and he played lead character Aiden Dennison on The N's South of Nowhere. He currently plays Syd on Rockville CA, a WB web series created by The O.C 's Josh Schwartz. In 2009, he co-produced The Outside, which starred Nia Peeples, Michael Graziadei, Dante Basco and South of Nowhere's Rob Moran. In late 2008, he had a guest starring role in the third episode of The CW's fourth season of Supernatural as a young John Winchester, which he later reprised in the fifth season episode “The Song Remains the Same.” He portrayed Johnny Jones in the upcoming Slasher/Thriller film Chain Letter. He will guest star in the fourth season of 90210 as Jeremy. He is married to his "South of Nowhere" co-star, Mandy Musgrave.