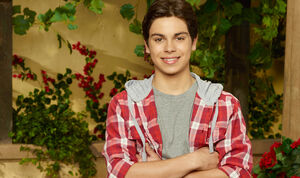 Max Russo is a former wizard and the youngest of the Russo trio. Like his brother and sister, he is half Mexican from his mother, Theresa and half Italian-American from his dad, Jerry.

At 16, he is the most mischievous, determined to take his magic "to the Max." When he's not dodging homework and vegetables, Max plays practical jokes on his siblings.

It is very hard to tell at times if Max is eccentric, outside the box or just stupid. He takes almost everything said to him literally, often confuses the meaning of words (such as aunt and ant), doesn't seem to understand when he's being insulted even when told he is being insulted, and has been known to do some very idiotic things such as shrinking his own brain just so he can store more jelly beans in his skull. However he has been shown to be an average level student despite his intellectual shortcomings.