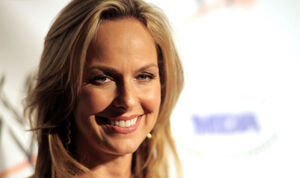 Melora Hardin is an American actress, best known for her roles as Jan Levenson on NBC's The Office and Trudy Monk on USA's Monk. She portrays the character of Mrs. Glenn.

Hardin was born in Houston, Texas, the daughter of acting manager/coach and retired actress Diane (née Hill) and actor Jerry Hardin. She is the sister of Flock CEO Shawn Hardin. She was raised in San Francisco, California, after her family moved there when she was 4 years old. She graduated from Sarah Lawrence College.

Hardin starred in the 2000-2001 series Cover Me: Based on the True Life of an FBI Family, and 2004-2009 she played the recurring role of Trudy Monk, the title character's deceased wife, on the USA Network series Monk. She appeared on the series NCIS as former Petty Officer Erin Toner in the episode "The Curse". In 2005, Hardin portrayed Linda Evans in Dynasty: The Making of a Guilty Pleasure, a fictionalized television movie based on the creation and behind the scenes production of the 1980s prime time soap opera Dynasty. Hardin played former corporate manager Jan Levenson on The Office since the show's debut in 2005 until 2011.

Hardin later appeared in the 2006 film Thank You for Smoking, and appears in Hannah Montana: The Movie as Robby Ray's (Billy Ray Cyrus') love interest. The film premiered on April 10, 2009. She played the role of Fantine in the Hollywood Bowl's concert of Les Misérables in Summer 2008. Hardin also appeared in several episodes of the popular web show, Elevator, on YouTube. Hardin made her Broadway debut as Roxie Hart in the revival of Chicago: The Musical on December 29, 2008. She stayed with the show until February 12, 2009.

Hardin was cast as a major character in the NBC drama Outlaw, playing a powerful senior partner of an elite law firm, and the main love interest to the series' protagonist, played by Jimmy Smits.

Retrieved from "https://ahighschoolrockstar.fandom.com/wiki/Melora_Hardin?oldid=8106"
Community content is available under CC-BY-SA unless otherwise noted.