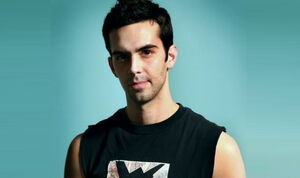 Michael Carbonaro is an American actor who was born in New York, New York. He portrays the character of Nicky G..

In 2003, he kicked off his film career starring as Mikey Falcone in A Tale of Two Pizzas (2003), alongside Vincent Pastore and Frank Vincent, and a year later was featured in the Chappelle's Show (2004) on Comedy Central. He has also starred in the successful Off-Broadway hit comedy, Jewtopia, as the lead character Adam. Following that, Carbonaro took on the bold role of Andy Wilson, a somewhat innocent, fresh-faced teen, in the 2006 comedy, Another Gay Movie (2006). For his work, he was recognized with an OUTfest "Best Actor in a Feature Film" award. Carbonaro has also taken to the television screen playing diverse soap opera characters in All My Children (2006), The Guiding Light (2006) and as Jeff Trapido in, Law & Order: Special Victims Unit (2007).

Retrieved from "https://ahighschoolrockstar.fandom.com/wiki/Michael_Carbonaro?oldid=7644"
Community content is available under CC-BY-SA unless otherwise noted.