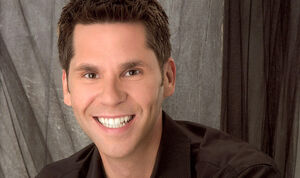 Mike is a good father, who supports his sons. He also encourages them to take part in their family business that he and his wife, Mimi Moon, owns, Moon's Mattress Kingdom.

He can sometimes be strict with his sons, giving them punishments. This was seen in the episode "Concerts & Chores" when he punished Austin by making him do all the chores after throwing a party at their house which ended up in a mess.

Retrieved from "https://ahighschoolrockstar.fandom.com/wiki/Mike_Moon?oldid=9431"
Community content is available under CC-BY-SA unless otherwise noted.