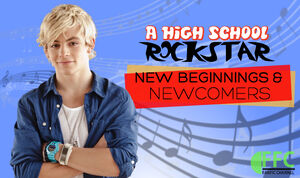 New Beginnings & Newcomers is the first episode in Season 3 of A High School Rockstar. It aired on October 26, 2013. It is the premiere episode of Season 3.

After a tough time, Team Austin decides to start fresh. They throw a party to celebrate Austin’s acting debut but what they don’t know is that he would only be appearing for a few seconds on camera. Ally’s cousin, Spencer Dawson, visits Miami but after immediately falling in love with Lexi, he decides to stay, for good.

Retrieved from "https://ahighschoolrockstar.fandom.com/wiki/New_Beginnings_%26_Newcomers?oldid=9207"
Community content is available under CC-BY-SA unless otherwise noted.