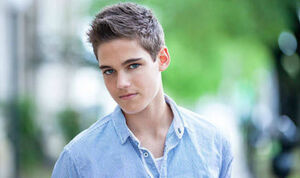 Nick Merico is a singer from Argentina. He does cover of songs and post it on Youtube. He portrays Nick Cross.

Nick was born in Argentina on December 29, 1995. He currently resides in Miami, Florida. Nick started performing at the age of 11 at various venues in South Florida. He has since been touring in schools and performing in other venues. At the Age of 11, Nick started an YouTube account of him singing. Ever since then he has been posting videos of him singing. His first cover was Grenade by Bruno Mars. His lastest cover has been All Of Me by John Legend and Nick had just released his new song "If You Were My Girl".

Retrieved from "https://ahighschoolrockstar.fandom.com/wiki/Nick_Merico?oldid=10023"
Community content is available under CC-BY-SA unless otherwise noted.