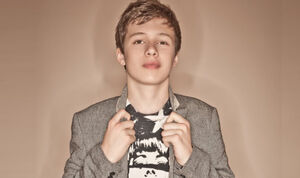 Nick Robinson is an American actor. He currently co-stars as Ryder Scanlon, the nephew of Mel Burke, in the ABC Family sitcom Melissa & Joey. He also plays the protagonist, Joe Toy, in The Kings of Summer(2013), directed by Jordan Vogt-Roberts.

Robinson was born March 22, 1995 in Seattle, Washington. He is the oldest of five children, though he also has two older half-siblings from his father's previous marriage. At age 9, his parents enrolled him in a local children's theater group called "Broadway Bound." At age 11, Robinson made his professional acting debut in a stage version of Charles Dickens' A Christmas Carol. Robinson continued to perform in regional theater productions throughout the Seattle-area, including To Kill A Mockingbird, Mame, and A Thousand Clowns.

In 2008, a theater friend suggested to Robinson's parents that Nick should meet with legendary Hollywood talent scout, Matt Casella, who said of Robinson, "He's a real kid, with an extraordinary talent and gift, not to mention a smart, good natured, creative kid with a great smile. Nick is ready for LA." Casella then recommended him to a few agencies and eventually signed with The Savage Agency in Los Angeles. Unfortunately for Robinson, the 2007–2008 Writers Guild of America strike was in full swing so he and his parents returned to Washington where he continued to perform on stage in and around Seattle.

In 2009, after only his second television audition, Robinson landed the role of Ryder Scanlon, nephew of Melissa Joan Hart's character on the ABC Family sitcom, Melissa & Joey. Melissa & Joey premiered on August 17, 2010 and was an immediate hit. In 2011, while on hiatus from Melissa & Joey, Robinson began filming of the Disney Channel original movie Frenemies with fellow Disney stars Bella Thorne and Zendaya of “Shake It Up.” Robinson played the role of Jake Logan. Frenemies premiered on January 13, 2012 to stellar ratings on the Disney Channel.

In 2012, Robinson was cast in the lead role of Joe Toy in director Jordan Vogt-Roberts feature film-debut The Kings of Summer. Filming began in May 2012 in the Cleveland, Ohio-area and ended August 2012. The film, which premiered in select locations on May 31, 2013, is about a group of three outcast teens who decide one summer to leave home and live on their own in the nearby woods. He also guest-starred in the third season of HBO's Boardwalk Empire as Rowland Smith, a young thief who has stolen part of Nucky Thompson's (Steve Buscemi) underground liquor shipments. The episode, entitled “Blue Bell Boy,” aired October 7, 2012. During the summer of 2012, Robinson began starring in a series of television commercials for Cox Communications entitled "Buffer Time is Bonding Time." A new series of commercials began airing in October 2012.

Retrieved from "https://ahighschoolrockstar.fandom.com/wiki/Nick_Robinson?oldid=9062"
Community content is available under CC-BY-SA unless otherwise noted.