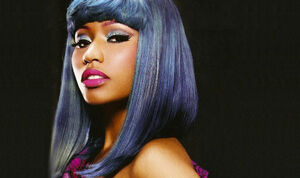 Nicki Minaj is an American rapper, singer, songwriter, actress, and television personality. After success with three mixtapes released between 2007 and 2009, Minaj signed to Young Money Entertainment.

Onika Tanya Maraj was born in Saint James, a suburb of Port of Spain, the capital of Trinidad and Tobago, on December 8, 1982, to parents Carol and Robert Maraj. She is of mixed Indian and Afro-Trinidadian ancestry and has two siblings. Minaj's mother held numerous jobs, including an accounting clerk, a foreign exchange teller, and a gospel singer. Her father worked for American Express, suffered from alcohol and drug addictions, and once attempted to kill her mother by setting their house on fire. Until she was five years old, Minaj lived with her grandmother in Saint James, and was occasionally visited by her mother. She and her mother later moved to Queens, a borough in New York City. Minaj stated that her upbringing lacked discipline, and caused her to "seek out and practice self discipline".

Minaj attended P.S 045 Clarence Witherspoon School during her elementary years, and later attended Elizabeth Blackwell Middle School 210, where she played the clarinet. She then graduated from LaGuardia High School, which specializes in music and the visual and performing arts. Minaj participated in the drama program and initially planned to sing at LaGuardia, but lost her voice on the day of the audition. Minaj described her high school life as being distracted from her academics by “acting and boys”. Minaj wanted to become an actress, and in 2001, she was cast in the Off-Broadway play, "In Case You Forget". After her acting career failed to take off, Minaj worked at Red Lobster in the Bronx at the age of 19 as a waitress. Minaj was fired from Red Lobster because of her discourteousness to customers. She stated she had been fired from "at least fifteen jobs" for similar antics. Other jobs Minaj held were administrative assistant, customer service, and an office manager position at an unknown business located on Wall Street.

Minaj briefly signed with Brooklyn group Full Force, in which Minaj rapped in a foursome group called "Hoodstars," which consisted of group members Lou$tar (son of "Bowlegged Lou"), Scaff Beezy, and 7even Up. In 2004 the group recorded the entrance song for WWE Diva Victoria titled "Don't Mess With," it was featured on the compilation album ThemeAddict: WWE The Music, Vol.6. Minaj left the group, unsatisfied with their lack of success. During this time, Minaj uploaded a few songs on her Myspace profile and sent a few of her songs to people in the music industry. At the time, she was managed by Debra Antney. Fendi, CEO of the Brooklyn label Dirty Money Entertainment, who also found rapper Gravy, discovered the music and contacted Minaj, signing her to his label. Initially, Minaj adopted the pseudonym "Nicki Maraj", later changing to "Nicki Minaj", stating "My real name is Maraj. Fendi flipped it when he met me because I had such a nasty flow! I eat bitches!" Under Fendi's label, Minaj appeared on the popular street DVD "The Come Up Volume 11" that featured underground rappers from New York.

After a major record label bidding war, Young Money Entertainment announced on August 31, 2009 that Minaj had been released from a 360 deal with the label in which she retains and owns all of her 360 rights, including merchandising, sponsorships, endorsements, touring and publishing. Minaj was featured on Rihanna's "Raining Men" from her album Loud, which would lead to a second collaboration on Minaj's "Fly" from her album Pink Friday. Hip-hop rap artist and producer Kanye West was also confirmed for the album. On August 3, 2010, Minaj revealed on an Ustream.tv channel that the album's name would be Pink Friday, a nod to Black Friday.

Pink Friday was released on November 19, 2010. A buzz single, "Massive Attack", was released in April. In August, Minaj released "Your Love" as the first official single from her debut album. The single peaked at 14 on the Billboard Hot 100, 7 on the Hot R&B/Hip-Hop Songs chart, and topped the Rap Songs chart. Minaj became the first female artist to be included on MTV's Annual Hottest MC List and the first female artist to top the chart unaccompanied since 2002. In October 2010, Minaj became the first female solo artist to have seven songs on the Billboard Hot 100 chart simultaneously. She released two singles in September 2010; one a joint single with The Black Eyed Peas front man, will.i.am titled, "Check It Out," and the other "Right Thru Me." The music videos for both were released in late October. "Moment 4 Life" was released as the fourth single on December 7, 2010, featuring Canadian rapper Drake, becoming a success on the Billboard Hot 100. The single peaked at number 5 on the Hot Rap Songs.

The album gained Platinum certification in the United States a month after the release. On January 29, 2011, Minaj appeared on Saturday Night Live as the musical guest, performing "Right Thru Me" and "Moment 4 Life". On February 9, 2011, Pink Friday reached number one on the Billboard 200 in its eleventh week on the chart. Minaj turned down an offer to become a judge on The X Factor, as rapped on her song "Roman Reloaded", due to its salary. In June 2011, Minaj was an opening act along with Jessie and the Toy Boys and Nervo on Britney Spears' sixth concert tour, the Femme Fatale Tour, in support of her seventh studio album, Femme Fatale. She and singer Kesha were featured on the remix of Spears' track "Till the World Ends," which charted at number 3 in the US in April 2011. "Super Bass" was released from Pink Friday in May 2011. The single charted within the top 10 in many countries including the United Kingdom, United States, Australia and Canada, and later was certified as octuple-platinum by the Recording Industry Association of America (RIAA). The song gained positive reviews from critics. Minaj went on to attribute the success of the single in part to Taylor Swift, saying in an interview with American radio station 102.7 KIIS FM, "Taylor Swift did her little interview about 'Super Bass' and it took off in the States with the people sort of knowing it...It's just really uncanny how all that stuff happens...We didn't plan it like that." Minaj voiced a character in the 3D animated film, Ice Age: Continental Drift, as Steffie, a woolly mammoth. Minaj is also featured on French DJ David Guetta's 2011 album, Nothing but the Beat, on the singles "Where Them Girls At" and "Turn Me On".

Retrieved from "https://ahighschoolrockstar.fandom.com/wiki/Nicki_Minaj?oldid=9397"
Community content is available under CC-BY-SA unless otherwise noted.