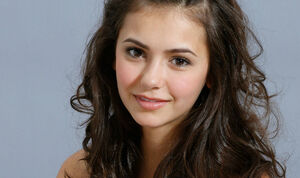 Nikolina Konstantinova Dobreva known professionally as Nina Dobrev, is a Canadian actress and model. She played the role of Mia Jones, the single teenage mother, on Degrassi: The Next Generation, from the show's sixth to ninth season. She currently stars as Elena Gilbert and Katherine Pierce on The CW American television teen drama, The Vampire Diaries. She portrays Amber.

Nina Dobrev was born in Sofia, People's Republic of Bulgaria (now Republic of Bulgaria) as Николина Константинова Добрева, and moved to Canada at the age of two, where she was raised in Toronto, Ontario. She speaks fluent French, English, and Bulgarian. She has an older brother, Alexander; her father is a computer specialist and her mother is an artist.

Dobrev attended J. B. Tyrrell Sr. Public School, where she started ballet and jazz classes, and competed in rhythmic gymnastics. Then, she attended Wexford Collegiate School for the Arts in Scarborough, Ontario and Ryerson University in Toronto, majoring in sociology. She left in 2008 to pursue her acting career.

Modeling jobs led to commercials, which then turned into film auditions. Shortly thereafter, she booked roles in feature films, including Fugitive Pieces, Away from Her, Never Cry Werewolf, and the television series Degrassi: The Next Generation. She starred in a number of Lifetime original movies. In 2007 she appeared in the music video of You Got That Light performed by Wade Allain-Marcus and David Baum. She also was in an MTV movie called The American Mall on CTV. She is currently starring in The CW's drama The Vampire Diaries, playing the dual role of Katherine Pierce, a vampire loved by two human brothers during the American Civil War, and Katherine's doppelgänger Elena Gilbert, a human who is caught between the same two brothers, now vampires, Damon and Stefan Salvatore.

In 2012, she appeared in a Funny or Die music video with Nick Braun called SPF. The song, written by Dobrev, Braun, and hip-hop producer Jewels Beats, charted as high as #188 on iTunes Comedy Charts.

Retrieved from "https://ahighschoolrockstar.fandom.com/wiki/Nina_Dobrev?oldid=7115"
Community content is available under CC-BY-SA unless otherwise noted.