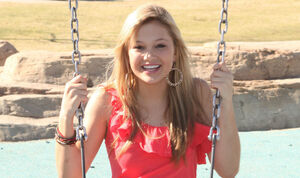 Olivia Holt is an American teen actress and singer, best known for portraying Kim on the Disney XD series Kickin' It. She is also starring in the Disney original movie Girl vs. Monster coming out in October 2012. She portrays Jane Grant in A High School Rockstar.

Holt was born in Germantown, Tennessee, to parents Mark and Kim Holt. She has an older sister named Morgan, and a younger brother named Cade. At age 3, she moved to Nesbit, Mississippi where she grew up. She currently resides in Los Angeles, California with her family.

Her career began when she was involved doing local theater productions. She has appeared in several television commercials, including Hasbro, Kidz Bop 14, Mattel and Bratz dolls. Holt auditioned for Disney XD's martial arts show Kickin' It, which premiered in 2011. Having skills in gymnastics, she got the call back from producers and joined the cast in 2011. She has been with them for 2 seasons.

Holt is going to star in the upcoming Disney Channel original film Girl vs. Monster. She will play the lead character Skylar, a teenage girl who finds out that she comes from a long line of monster hunters and she's next up for the job. The film will premiere in Fall 2012.