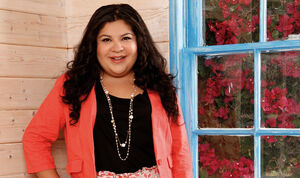 Patricia Maria "Trish" De La Rosa is a 25-year old fashionista who enjoys getting jobs, but is also constantly getting fired because of her silly mistakes. She mangages Austin and often finds and books him gigs that could help him with his dream. She is portrayed by Raini Rodriguez.

Trish is very unpredictable, fun, selfish, mean, and often sarcastic. She is constantly getting hired and then fired from job after job. She is Ally's faithful best friend since kindergarten. Even though they are completely different from each other, they still get along well. She is currently frenemies with Dezmond "Dez". Trish is good in helping Austin with his career. She always gets him gigs that could get him discovered. Trish has her own dream that she wants to fulfill. She wants to be a singer, like Austin.

Trish books Austin a gig at the mall. She noticed that Ally has feeling for Austin and confronts her about it. After the gig at the mall, Trish finds out that Austin has confessed to Ally.

Trish gives Austin a gift certificate to Red Lovester where she works. When Austin asks Ally on a date, she is left in charge with the store together with Dez. When she get fired from her job, she gets another job at Dress Hut. When she gets bored at the store, she tricks Dez into cleaning up the whole store by playing Truth or Dare. But it all ends in disaster when Dez outsmarts her and dares her to reach the guitar on the top shelf which she couldn't reach. Then she falls back and made a mess in the store.