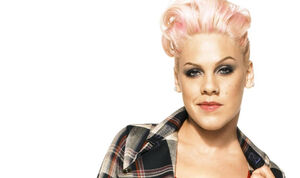 Pink is an American singer-songwriter and actress. Originally a member of the girl group Choice, she began her solo career with the 2000 single "There You Go" which was also included in her debut album, Can't Take Me Home, released later that year. The R&B album went on to be certified double-platinum in the United States. She gained further recognition upon collaborating with Lil' Kim, Christina Aguilera and Mýa for a cover of "Lady Marmalade" for the Moulin Rouge! soundtrack. That cover earned Pink her first Grammy Award (for Best Pop Collaboration with Vocals) as well as her first number-one single on the Billboard Hot 100.

Alecia Moore was born on September 8, 1979, in Abington, Pennsylvania, to Judith (née Kugel), a nurse, and Jim Moore, a Vietnam veteran. Her father is Catholic and her mother is Jewish. Pink has ancestors who emigrated from Ireland, Germany, and Lithuania. Although a healthy baby at birth, she quickly developed asthma that plagued her through her early years. Pink grew up in Doylestown, where she attended Kutz Elementary School, Lenape Middle School, and Central Bucks High School West. Her father played guitar and sang songs, thus inspiring Pink from an early age to be a pop star. She was also a gymnast for eight years; she stated in an interview that her first dream was to be an Olympic gymnast.

When she was just a toddler, her parents began having marital problems, and before she was ten her parents had divorced. Pink said in a VH1 special: "My household was World War III. My parents hated each other. I mean I knew what divorce was and what it meant before I really knew what marriage meant". Pink developed her voice early in life. In high school, Pink joined her first band, Middleground, but it disbanded upon losing a battle of the bands competition. As a teenager, she wrote lyrics as an outlet for her feelings, and her mother commented, "Her initial writings were always very introspective. Some of it was very black, and very deep, almost worrisome."

She began performing in Philadelphia clubs when she was 14. She adopted her stagename, "Pink", around this time. She had had that nickname for quite some time by that point, and initially it had been "a mean thing". Pink has said, "I was extreme. I went through phases from skateboarder, to hip-hopper, to rave child, to lead singer in a band. I did it all, and all at the same time." At 14, she was convinced to audition to become a member of the all-female group Basic Instinct, and earned a spot in the lineup. Ultimately, the group disbanded without releasing any material. At 16, Pink and two other teenage girls, Stephanie Galligan and Chrissy Conway, formed the R&B group Choice. A copy of their first song, "Key to My Heart", was sent to LaFace Records in Atlanta, Georgia, where L.A. Reid overheard it and arranged for the group to fly there so he could see them perform. After that, he signed them to a record deal. Since the three girls were under 18 at the time, their parents had to cosign the contract. The group relocated to Atlanta and recorded an album, which was never released, and "Key to My Heart" appeared on the soundtrack to the 1996 film Kazaam. During a Christmas party, Reid gave Pink an ultimatum: go solo or go home. Choice disbanded in 1998.

In November 2003, Pink released her third album, Try This, preceded by the single "Trouble". Although not her most successful album, Try This earned Pink her first solo Grammy Award, for best female rock vocal performance. After a short hiatus, her fourth studio album, I'm Not Dead, was released in April 2006. With the help of successful singles "Stupid Girls", "Who Knew", and "U + Ur Hand", I'm Not Dead marked a revival in Pink's popularity, both in the US and worldwide. Pink's fifth album, Funhouse, was released in late 2008 and was preceded by her first solo number one on the Billboard Hot 100, "So What". The album was certified double-platinum in the US and prompted Pink to go on the record-breaking Funhouse Tour. Her first compilation album, Greatest Hits... So Far!!!, was released in November 2010 and produced two chart-topping singles, "Raise Your Glass" and "Fuckin' Perfect". Her latest album, The Truth About Love, was released in 2012 and became her first number one album in the United States. The album's three singles, "Blow Me (One Last Kiss)", "Try", and "Just Give Me a Reason", all reached the top ten of the Billboard Hot 100, with "Just Give Me a Reason" becoming her 4th number-one single. According to the RCA record's Pink is the best selling female artist of 2013 with 886,000 albums sold.

Pink has become one of the most successful artists of her generation, having sold over 45 million records worldwide as of 2013. Her career accolades include three Grammy Awards, a Brit Award, and six MTV Video Music Awards. Additionally, Pink has had 19 top-twenty hits on the Billboard Hot 100. In 2009, Billboard magazine named Pink the #1 pop musician of the decade, in 2012 VH1 named Pink #10 on their list of the 100 Greatest Women in Music, and in 2013 Billboard named Moore the Woman of the Year.Her net worth as of April 2013 is estimated to be around $70 million, making her one of the most commercially successful artists of her generation.