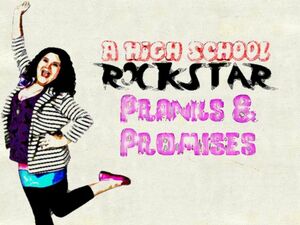 Pranks & Promises is the fourth episode in Season 2 of A High School Rockstar. It aired on October 13, 2012.

Austin gets a big gig as he gets offered once again by Starr Records to perform at a small concert being held at the Mall of Miami theatre. His rehearsals are interrupted by continuous pranks and Austin doesn't stop until he finds the prankster that could prevent him from proving himself to Starr Records. Meanwhile, Trish is struggling to keep a promise that she made to Ally and enlist the help of Dez to prevent her from breaking the promise.

Retrieved from "https://ahighschoolrockstar.fandom.com/wiki/Pranks_%26_Promises?oldid=7980"
Community content is available under CC-BY-SA unless otherwise noted.