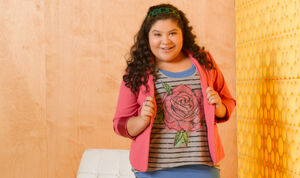 Raini Alena Rodriguez is an American actress. She is best known for portraying Maya Blart in Paul Blart: Mall Cop. She also appeared in an episode of The Suite Life of Zack and Cody as Betsy, and on the new Disney XD show I'm In The Band as Annoying Arlene. She appeared in the 2011 film Prom. Raini now stars on her main role portraying Trish on Austin & Ally.

Nineteen-year-old Rodriguez moved to Los Angeles to pursue her dream of acting and singing. She has guest starred in several television series including "The Suite Life of Zack and Cody," "I’m in the Band," "True Jackson," "Huff" and "Family of the Year." Rodriguez made her feature film debut in "Paul Blart: Mall Cop," where she starred as Kevin James’ daughter. She also starred in Disney’s hit feature film, "PROM" and was recently seen in "Girl In Progress" starring Eva Mendes and Patricia Arquette.

Born July 1, 1993 in Texas, Rodriguez has a younger brother who is also an actor, Rico Rodriguez, star of the hit ABC television series, "Modern Family." Music, directing, writing and producing are a big part of Rodriguez’s life. She recently started a production company with her brother Rico, teaches acting classes and shadows directors in the hopes of someday following in their footsteps. Raini loves to record music in her home studio and has a large and eclectic collection of songs. In her free time she enjoys playing the guitar, spending time with her family, going to the movies and reading.

This information was taken from these amazing websites:

Retrieved from "https://ahighschoolrockstar.fandom.com/wiki/Raini_Rodriguez?oldid=9129"
Community content is available under CC-BY-SA unless otherwise noted.