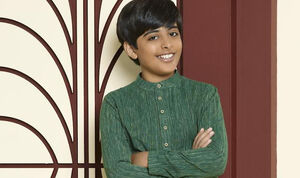 Ravi Ross is an Indian adoptee imbued with his Eastern culture, but is thrilled with his new life in America. He is the optimistic one of the bunch.

Ravi is a normal kid. He loves video games, and his pet Mrs. Kipling. He is aganist violence. He loves his new life in New York, but is fluent in Hindi, along with not being good in a crisis. Ravi worries about other people. He has a crush on Selena Gomez.