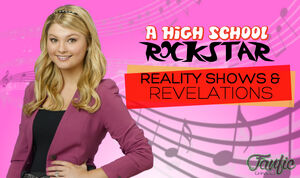 Reality Shows & Revelations is the thirteenth episode in Season 3 of A High School Rockstar. It aired on May 3, 2014.

Trish books Austin & Ally to be stars of their own reality show when she meets a producer. As they shoot their reality show, big revelations come their way that brings back someone they encountered in their past.

Retrieved from "https://ahighschoolrockstar.fandom.com/wiki/Reality_Shows_%26_Revelations?oldid=10004"
Community content is available under CC-BY-SA unless otherwise noted.