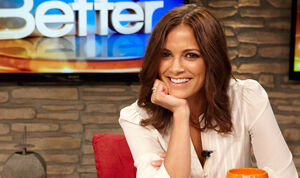 Rebecca Budig is an American actress and television presenter, best known for her role as Greenlee Smythe Lavery on the ABC soap opera All My Children.

Rebecca Budig was born in Cincinnati, Ohio, the daughter of Mary Jo, a homemaker, and George Budig, a businessman. She was raised in Fort Mitchell, Kentucky. She graduated from the Cincinnati Public Schools School for Creative and Performing Arts (SCPA) and later went on to major in zoology at Miami University in Ohio. In 1993, Budig moved to Los Angeles, California, to pursue an acting career. While there, she began studying with acting coaches Howard Fine and Jay Goldenberg at the Howard Fine Acting Studio and at the Young Actors Space, respectively.

Budig's first acting job was in Aerosmith's music video "Livin' on the Edge". She later had a cameo role as a teenage girl saved by Chris O'Donnell's character Dick Grayson in Batman Forever. In 1995, she auditioned for the role of Kelsey Jefferson on All My Children, but received an offer from Guiding Light, where she began her three-year stint as Michelle Bauer from (1995 to 1998).

Budig played the role of Patty in Captain Nuke and the Bomber Boys in 1995. She then portrayed Babsy in the 1996 film God's Lonely Man. Followed by James Dean: A Race with Destiny where she played actress Natalie Wood and Bonehead Detectives in the Paleo World where she played Allie. Both films were released in 1997.

Budig's most famous role has been that of the spoiled, rich girl-turned-makeup company executive Greenlee Smythe on All My Children—a role which she originated on August 11, 1999. Greenlee was supposed to be a recurring role, but executives enjoyed Budig and offered her a three-year contract. While on All My Children, Budig garnered accolades from fans and press for her performance on the soap opera, as well as her character's pairing with Josh Duhamel's Leo du Pres. She was nominated for a Daytime Emmy Award for Outstanding Supporting Actress in a Drama Series in 2001 and again in 2003. Her onscreen pairing with Duhamel earned them a Daytime Emmy Award nomination as well, for America's Favorite Couple in 2002. She was often called "Little Budig" by Duhamel, who had given her the nickname. In 2003, Budig won a Soap Opera Digest Award for Outstanding Younger Lead Actress. In November 2005, Budig left the show to relocate to California.

Other notable roles include co-hosting The Sports Illustrated for Kids Show. Budig worked for the World Wrestling Federation as an interviewer for a short time on Sunday Night HEAT in 2000. She has made appearances on Out of Practice, as well as on Hope & Faith. She did a movie called The Perfect Child (2007) featured on Lifetime with the leading role as Sarah Daniels. In addition, Budig has been seen on CSI playing a role as a murdered lap dancer (Season 8, Episodes 9 & 10).

It was confirmed in late 2007 that Budig would be returning to All My Children as Greenlee Smythe, the role she originated. She had been replaced by another actress Sabine Singh earlier that year. She returned to the show in January 2008. However, she signed a limited contract with the show. Later, while rumors circulated of Budig's departure, she confirmed in October 2008 that she would be leaving the series again in February 2009. Budig cited the reason for her departure as wanting to return to the West Coast to be with her husband. Budig returned to 'All My Children in late December 2009 (when the show relocated production to Los Angeles), and remained with the series until its series finale in September 2011. In 2010, she won the first and only season of the ABC show Skating with the Stars. The show paired celebrities with professional ice skaters, who competed each week. Since September 2013, she began co-hosting the syndicated lifestyle television show Better alongside JD Roberto.

Retrieved from "https://ahighschoolrockstar.fandom.com/wiki/Rebecca_Budig?oldid=9688"
Community content is available under CC-BY-SA unless otherwise noted.