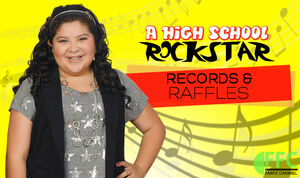 Records & Raffles is the eleventh episode in Season 3 of A High School Rockstar. It aired on March 29, 2014.

Tyler gets a record deal from Starr Records and are teamed up with Austin to produce a CD. They then compete to get the most songs presented to Jimmy Starr to be featured on their CD. Meanwhile, Aaron won a raffle that he quickly wastes on junk.

Retrieved from "https://ahighschoolrockstar.fandom.com/wiki/Records_%26_Raffles?oldid=9798"
Community content is available under CC-BY-SA unless otherwise noted.