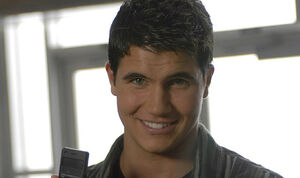 Robert Patrick "Robbie" Amell is a Canadian actor, who is best known for his role on the Nickelodeon series True Jackson, VP, Picture This, and Fred Jones in the television films Scooby-Doo! The Mystery Begins and Scooby-Doo! Curse of the Lake Monster. In 2011, he appeared in the role of "Scooby", Robin's dog-like Labradorian boyfriend in the CBS comedy series How I Met Your Mother.

Amell was born in Toronto, Ontario. Along with his sister, he started modeling and acting in small roles in commercials when he was six years old. He attended Armour Heights Public School and graduated in 2000. At 16, he began landing roles in high school plays such as Louis and Dave, Picasso at the Lapin Agile and The Importance of Being Earnest. He graduated from Lawrence Park Collegiate Institute in Toronto in 2006.

Amell appeared as Daniel Murtaugh in Cheaper by the Dozen 2. He also appeared in the 2010 horror film Left for Dead. He had a role in the Disney Channel series Life with Derek (he played Casey McDonald's boyfriend, Max).[1] He has also appeared in the ABC Family movie Picture This. Amell has a regular role on the Nickelodeon series True Jackson, VP as Max Madigan's nephew Jimmy, True's love interest. Amell is currently set to star in the comedy movie Seeing is Believing playing one of the 3 lead characters, Nick Wright, production for the movie began on May 3, 2010 and ended on July 1. The movie is set to premiere on January 14, 2011. He currently has a recurring role as Adam on the hit TV show Revenge.