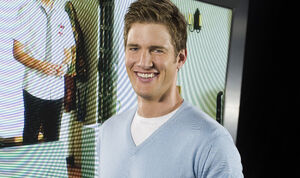 Ryan McPartlin is an American actor, best known for his role as Devon "Captain Awesome" Woodcomb on NBC's Chuck.

McPartlin was born in Chicago, Illinois, the son of Steve and Lois McPartlin. He was raised in Glen Ellyn, Illinois (a suburb of Chicago), and attended Glenbard South High School. McPartlin graduated with a degree in speech communication from the University of Illinois at Urbana-Champaign. He was a member of the Illinois Fighting Illini football team as a walk-on tight end from 1993-95. His older brother, Chris, was also a member of the Illini football team, earning a varsity letter as a linebacker in 1994. After six months in Australia and New Zealand, McPartlin moved to Southern California to pursue acting as a career. McPartlin is a board certified personal trainer. He has been married to actress Danielle Kirlin since October 26, 2002. They have two sons, Wyatt Duke and Dylan James. His hobbies include:scuba diving, tennis, snowboarding and racquetball.

McPartlin spent years as an Abercrombie and Fitch model. McPartlin's first acting role was on The Nanny, alongside Fran Drescher, as a Leonardo DiCaprio-type character in a Titanic spoof. McPartlin has been mostly known for his role as Hank Bennett on the popular soap opera Passions, replacing Dalton James from April 2001 until April 2004. He made a brief appearance in the series L.A. 7 as "Ryan".

McPartlin worked with Drescher again as Riley Martin on the television sitcom Living with Fran. He played her much younger live-in boyfriend. Living with Fran was cancelled on May 17, 2006, after two seasons. McPartlin originally auditioned for the role of Clark Kent/Superman in the movie Superman Returns, but he lost the role to Brandon Routh. He also played Devon "Captain Awesome" Woodcomb on NBC's Chuck.

One of his co-stars on Chuck, Yvonne Strahovski, also co-starred with him in the film LEGO: The Adventures of Clutch Powers. In mid-2011, he appeared in Sugarland's music video "Stuck Like Glue" as a man being stalked and abducted by lead singer Jennifer Nettles. He appears in commercials for Kate Walsh's perfume, Boyfriend. In March 2012, Ryan began working with the website LiveLifeLocal to help promote active lifestyles and is filming a series of web videos for the site.