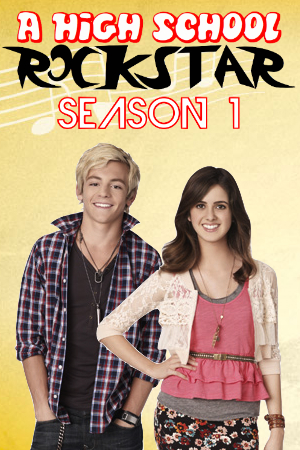 Season 1 is the first season of A High School Rockstar. It is consisted of 21 episodes. On August 6, creator announced that Season 1 will only consist of 20 episodes, removing Birthdays & Best Friends from the episode list. Aaron Moon once again announced that Season 1 will be left with only 19 episodes. Vacations & Violins will be postponed to Season 2 or maybe in a future season. Season 1 premiered on March 24, 2012 on Youtube.

The first season of A High School Rockstar revolves around Austin, Ally, Trish, Dez, Lexi and Aaron's lives as they go through high school while fulfilling their dreams. Join them as they face challenges and experience adventures not normal teenagers do.

The main cast for the first two episodes are the same. Ross Lynch, Laura Marano, Raini Rodriguez and Calum Worthy are the main cast. In the episode Spies & Missions, two more main characters are introduced. Stefanie Scott and Spencer Boldman joins our main cast. Also, Andy Milder, Noah Centineo and Cole Sand are part of the minor cast together with the newest addition Jack Griffo and Garrett Backstrom.

The episodes are arranged in chronological order.

Retrieved from "https://ahighschoolrockstar.fandom.com/wiki/Season_1?oldid=9391"
Community content is available under CC-BY-SA unless otherwise noted.