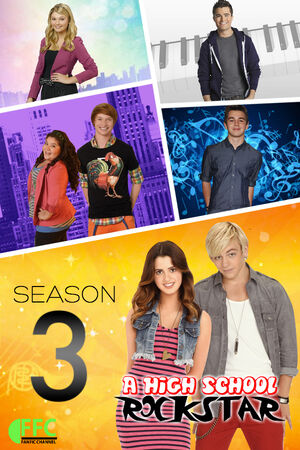 Season 3 is the third season of A High School Rockstar. Season 3 was announced and ordered by Laugh Productions on October 4, 2012 in Los Angeles. Production will start in the second quarter of 2013 and will last until the summer of 2014. Fanfic Channel has ordered 22 episodes for the third season on July 31, 2013 which will premiere on October 26, 2013. It officially premiered October 26, 2013.

The season went into a long hiatus since July 2014 because of the upgrades that Fanfic went through, as well as the launch of a new studio. On December 2014, it was announced that the remaining few episodes of Season 3 will air starting January 10, 2015.

As Team Austin starts new chapters of their lives, big changes happen in Miami. Austin goes to the next level when other famous recording companies offer him bigger records. With her newfound courage, Ally is getting closer to achieving her dreams, and even getting a record deal. The duo Dez & Trish finds them selves in a closer relationship, but tries to keep it a secret. Aaron tries to uncover his past and discover huge revelations in the process. With her recent breakup with Aaron, Lexi finds it hard to move on but when he meets an unexpected guest, she becomes confused with her feelings. Tyler is passed down with a huge responsibility that could prevent him from becoming a singer. Throughout the challenges they face, they stick together and act as a team to be able to reach their dreams as graduation is nearing.

Production will officially start on the second quarter of 2013. Directors, Writers, Songwriters and Casting Directors have all been confirmed. For cast members, the only confirmed cast will be Ross Lynch and Laura Marano returning for their main roles. There has been some twitter suspicions & rumours that Austin North and Jean-Luc Bilodeau will be part of the recurring cast.

Through his Twitter, Aaron Moon confirmed that Colton Haynes, Luke Bilyk and Nina Dobrev will be part of Season 3. Aaron has also confirmed that Emma Stone will be appearing as a Recurring Cast on Season 3, as well as two Filipino actors that are yet to be named.

Unfortunately, there will be some cast members not returning for Season 3, including Robbie Amell, Samantha Boscarino and Anna Maria Perez De Tagle. On February 24, 2013, Aaron confirmed through his Twitter and Instagram account that the two Filipino actors joining the cast in Season 3 are Enchong Dee and Julia Montes. Enchong and Julia will only be guest stars and not recurring.

The official twitter of A High School Rockstar tweeted that Jack Griffo and Raini Rodriguez will be back for Season 3 reprising their roles. Calum Worthy, Spencer Boldman and Stefanie Scott will also return as their characters in Season 3.

On July 31, 2013, Fanfic Channel has confirmed the cast list for the third season. Also, Aaron Moon will come back as the writer for the series, including some of FFCs most talented, Daniel Arch and Alexis Carter. Kenneth Padilla also returns to co-direct with Moon. The new season will bring in big stars like Katy Perry, Taylor Lautner, Mila Kunis, Stephen Amell and more! With big stars, also come big episodes! With crossover episodes with Shake It Up! and Good Luck Charlie. A special episode is also currently in pre-production that will be announced sometime in the Fall. Katy Perry, Nick Robinson and Austin Mahone has been confirmed to be part of the recurring cast.

On January 17, 2014, Fanfic Channel has cancelled production on A High School Rockstar's crossover with Good Luck Charlie and Shake It Up. The crossovers in the past season has not gained much views and it might not go well too, since both the said shows have ended or are nearing their series finale. Fanfic Channel confirmed that there will be no crossover in the current season with any shows.

These episodes have confirmed airdates or have been aired already.

These episodes have unconfirmed airdates and are upcoming episodes.

After the fifteenth episode, Glee Clubs & Gamers, the third season went into hiatus. The break was unexpected but the producers wanted the show to have a long break in order to give time for the companies upgrades and launching of a new studio. The remaining few episodes of Season 3 will air starting on January 10, 2015, which was announced on December 2014.

Retrieved from "https://ahighschoolrockstar.fandom.com/wiki/Season_3?oldid=10169"
Community content is available under CC-BY-SA unless otherwise noted.