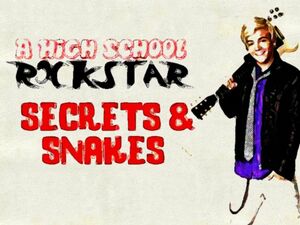 Secrets & Snakes is the premiere episode in Season 2 of A High School Rockstar. It aired on September 29, 2012.

Austin and the gang starts their new school year after Austin Moon turns down a record deal from Starr Records. A long hidden treasure of Ally’s grandfather is uncovered after Aaron finds a secret room in the Sonic Boom. Meanwhile, Trish gets a job at Reptile World, where she deals with three hundred snakes who escaped their aquariums.

Retrieved from "https://ahighschoolrockstar.fandom.com/wiki/Secrets_%26_Snakes?oldid=9645"
Community content is available under CC-BY-SA unless otherwise noted.