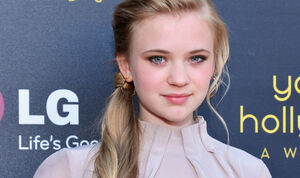 Sierra McCormick is an American actress, best known for her current role as Olive Doyle in the Disney Channel Original Series, A.N.T. Farm, and her participation on the U.S. game show Are You Smarter Than a 5th Grader?

McCormick first took an interest in acting in 2006 when she joined The Corsa Agency in Los Angeles. McCormick's first onscreen appearance was uncredited, in the television series 'Til Death at the age of nine. In 2007, she beat out thousands of other children to be cast in second season of the game show Are You Smarter Than a 5th Grader? McCormick also guest starred on the Disney Channel series Hannah Montana in the 2008 episode "Welcome to the Bungle". She and China Anne McClain played girls who ask Hannah Montana questions during an interview. She also co-starred with McClain in the film Jack and Janet Save the Planet. Her other acting credits include the film Ramona and Beezus in 2010 as Susan Kushner and the television film A Nanny for Christmas in 2011.

In 2011, McCormick was chosen for the role of Olive, a girl with an eidetic memory, in the Disney Channel series A.N.T. Farm. She was cast after an audition where she continually talked about tigers. Dan Signer stated "And as I heard her continually talking about tigers, I thought 'That's just how Olive would sound.' Which is how Sierra got that part." According to an interview with McCormick, getting the role was easy because she and China were already friends from their previous work experience.

McCormick was born in Asheville, North Carolina. She moved to Los Angeles, California at a young age. She currently lives there with her parents and sister Kayla. She has a dog named Annie, who appeared with Sierra in a PETA ad campaign promoting the adoption of shelter animals.