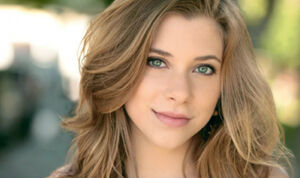 Skyler Day is an American actress and singer. She is best known for her recurring role as Maggie Ritter on the TeenNick series Gigantic. She currently has a recurring role as Amy Ellis on the NBC series Parenthood.

Day was born in Cumming, Georgia. She started participating in gymnastics and modeling at an early age. She was then discovered by a talent agent as a result of a chance encounter at the DMV. In 2003, she co-starred in the Atlanta-based short film A Perilous Dance: The Damon DeRivers Story. In 2004, she and her family moved to French Valley, California, so Day could pursue a career in the entertainment industry. Day has a twin brother named Dalton and an older sister named Savannah. They have both competed in gymnastics and cheerleading, respectively. Her parents, David and Kelly, were also gymnasts and owned a gym in Norcross, Georgia.

For many months, she auditioned for television pilots and took jobs doing radio voice-overs and television commercials before landing a role in the independent film The Religion of Choice In 2003, she was given the title role in the direct-to-video film The Adventures of Ociee Nash opposite Keith Carradine and Mare Winningham. From 2004 to 2008, she co-starred in a number of television films and short independent films before guest starring in a 2009 episode of iCarly. Her other television credits include Southland, Drop Dead Diva, The Whole Truth, Days of our Lives, Law & Order: Los Angeles, Sonny with a Chance, CSI: Miami and Good Luck Charlie. In 2010, she had a recurring role in the TeenNick series Gigantic. The series ended the following year after one season. In 2011, she landed the role of Amy Ellis on the NBC series Parenthood. Besides acting, Day is also an aspiring country singer. Growing up she took classes in in musical theater, acting and songwriting. Much of her music can be found on her official YouTube account.