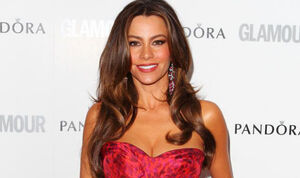 Sofia Vergara is a Colombian actress, comedian, television hostess, and model. Vergara had been widely known for co-hosting two television shows for Univisión in the late 1990s. Her television career opened up for her a window of exposure to North American audiences prior to her first notable acting job in English, the 2003 film Chasing Papi. Subsequently, she appeared in films, including two Tyler Perry films, Meet the Browns (2008) and Madea Goes to Jail (2009), receiving an ALMA Award nomination for the latter. Vergara's success on television has earned her roles in recent films, The Smurfs (2011), New Year's Eve (2011), Happy Feet Two (2011) and The Three Stooges (2012).

Vergara was born in Barranquilla, Colombia. Her mother, Margarita Vergara Dávila de Vergara, is a housewife, and her father, Julio Enrique Vergara Robayo, produced cattle for the meat industry. "Toti" was the nickname given to Vergara by her five brothers and sisters and many cousins. She grew up in her hometown of Barranquilla and was raised as a devout Catholic in a well-off family, attending a private bilingual Spanish/English school, known as Marymount School Barranquilla.

After a marriage at 18 and divorce two years later, Vergara studied pre-dentistry at a university in Colombia for three years. Then, many opportunities arose for her to work in modeling and in show business, and Vergara decided to pursue them, leaving her undergraduate/pre-dentistry studies two semesters shy of her undergraduate degree. Soon she decided to move to Miami, Florida, to take advantage of opportunities and to move away from unrest in Colombia (her older brother had been murdered in 1998 during an attempt to kidnap him). She brought her son, mother and sister with her. Her cousin and adopted sister, Sandra, is also a television actress in the United States.

Vergara was discovered by a photographer while walking on a Colombian beach. Soon she was presented with offers in modeling and television work, and she considered accepting them despite being raised both conservatively and religiously. According to an article in the January 2002 issue of Maxim, Vergara was "apprehensive about doing her first television commercial—until her Catholic schoolteachers gave her their personal permission to take the assignment." Vergara made her first appearance as a performer at the age of seventeen in a Pepsi commercial that was widely broadcast in Latin America.

At the age of 20, Vergara moved to Bogotá, Colombia, where she worked as a runway model and on television. From 1995 to 1998, she was co-host with Fernando Fiore of Fuera de serie ("Out of the Ordinary" or "Over-the-Top"), a travel series that sent her to exotic places around the world. It was telecast on the international Univisión Spanish-language television network, and it made her a star in the Latin American market. It also gave Vergara television exposure in the United States via the Univisión stations there. She co-hosted the Univisión show A que no te atreves ("I Dare You"). She appeared as a guest star in the season-four opening of the HBO series Entourage.