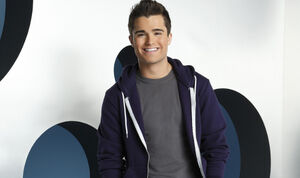 Spencer Boldman is an actor born in Dallas, Texas. He stars in the Disney XD show, Lab Rats.

Spencer Boldman was born in Dallas,Texas and raised in the suburb of Plano. At the age of 12, he was coaxed into trying out for his school production "A Midnight Summer Night Dream",after a teacher saw him perform in his theater class.Spencer ended up getting the lead role and his passion for acting grew from there.Within less than a month after meeting a local talented manager,Spencer was in L.A. booking roles on shows like iCarly and I'm in the band.

He has starred in two pilots for Disney Channel ,Jack,in "Jack and Janet Save the Planet" and Adam in "Billion Dollar Freshman". He is currently shooting his third one. Spencer graduated Plano High East Senior School inJune 2010. His favorite sports are football,lacrosse,and snowboarding.He is a huge fan of new England Patriots and Texas LongHorns. He is currently moving back and forth between Dallas and Los Angeles.

Retrieved from "https://ahighschoolrockstar.fandom.com/wiki/Spencer_Boldman?oldid=9130"
Community content is available under CC-BY-SA unless otherwise noted.