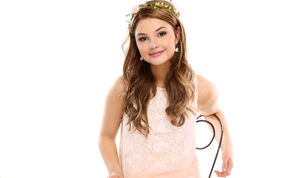 Stefanie Scott (born December 6, 1996 in Chicago, Illinois) is an American actress who plays Lexi Reed on both A.N.T. Farm and A High School Rockstar.

Scott was born December 6, 1996 in Chicago, Illinois. She appeared in the role of Katie in Beethoven's Big Break. She appeared in the feature film Flipped directed by Rob Reiner as well as in the film titled No Strings Attached where she played a young version of the main character.

Scott was the voice of Emma on the Disney animated TV series Special Agent Oso premiering in April, 2009 on The Disney Channel. Scott had a guest starring role on the Fox series Sons of Tucson as well as on NBC series Chuck playing the 12 year old Sarah Walker. Stefanie was originally supposed to play Tinka Hessenheffer on Shake It Up, but was later replaced. Scott is also a singer, songwriter, penning the lyrics to several original songs including "Shoulda Woulda Coulda" and "The Girl I Used To Know". Sometime in 2012, she will star in the new DCOM "Frenimes." As a result, her character, Lexi, is missing from 3 episodes of ANT Farm.

Retrieved from "https://ahighschoolrockstar.fandom.com/wiki/Stefanie_Scott?oldid=9279"
Community content is available under CC-BY-SA unless otherwise noted.