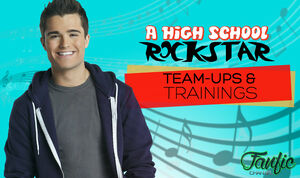 Team-Ups & Trainings is the twelfth episode in Season 3 of A High School Rockstar. It aired on April 12, 2014.

Austin is teamed up with one of Starr Records’ rising artist, Luke Posey, to tour students around Starr records and perform a song for them. Meanwhile, Ally, Lexi and Trish attends a physical training at Vinyl Records with some of the industries biggest stars including Katy Perry.

Retrieved from "https://ahighschoolrockstar.fandom.com/wiki/Team-Ups_%26_Trainings?oldid=10208"
Community content is available under CC-BY-SA unless otherwise noted.