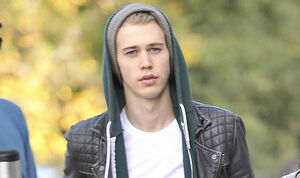 Tony O'Donnell is the student that Trish hired to drive them to New York. He had an online profile where he says that he's a professional driver, but only in video games.

Tony is the gamer dude that Trish hired to drive them to New York. He is a professional driver in video games, but is the opposite in real life. He is good looking and tall, which makes Trish attracted to him. He also gets nervous in highways because of fast cars, despite his good skills in video games.

He knows how to drive in real life, but is still in the process of learning. He seems to need the money as he accepted the job Trish offered him, even though he knew he wasn't a good driver. He's a straightforward guy and does not seem to care what other people think of him.