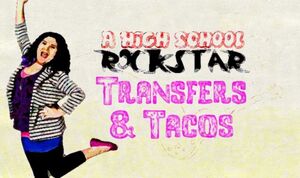 Transfers & Tacos is the eighteenth episode in Season 2 of A High School Rockstar. It aired on March 2, 2013.

Team Austin gets to babysit the transfer student from the Philippines whom they become interested in when they found out he has a musical talent. The gang then brings him to Taco-Licious where Austin will be performing, but Trish accidentally serves them spoiled Tacos, preventing Austin from performing.

Retrieved from "https://ahighschoolrockstar.fandom.com/wiki/Transfers_%26_Tacos?oldid=9650"
Community content is available under CC-BY-SA unless otherwise noted.